What makes a good character? An interesting and relatable personality, intriguing motivations and goals, and (usually) a compelling character arc!

Readers love to read about a character that has to contend not just with the main conflict of the story, but also with themselves. Readers want to be able to follow the protagonist along their journey of self-reflection, self-discovery and to see how much they've grown.

So, if you want to write the best character arc that will elevate your story to next level, keep reading!

What is a character arc?

First of all, let's establish what a character arc actually is.

A character arc refers to the path a character (usually your main character) takes over the course of your story, and the journey through which they become a more developed character!

Have you ever encountered a character that you despised at first, but slowly grew to like them as they matured and changed? Well, that's a character arc!

The 4 types of character arcs

As you plan your story and craft your character arcs, it may be helpful for you to learn about the 4 types of character arcs present in almost every story. It's important to find out which type of character arc suits your vision the best or which one you're gravitating to the most!

Photo by Denise Jans on Unsplash

In a transformational character arc, your main character begins as an underdog, but eventually prevails and becomes a hero. This type of character arc is as old as time, and it is commonly associated with the Hero's Journey archetype.

In many cases, the protagonist becomes the hero because of hidden strengths, talents or abilities of theirs that surface as the story goes on.

A great example of such a character arc would be Harry Potter! He begins the story as a quiet, unassuming child neglected by the Dursleys, but the discovery of his magical abilities — and later, the prophecy — turns him into a great hero.

For example, a divorce may force a man to look within himself and address his flaws and insecurities.

It is in defeating their inner demons that your protagonist grows, learns and matures into a better person!

This is perhaps the most neutral of character arcs. In an alteration character arc, your character changes their perspective rather than their behavior or personality.

To compare the two, a maturity character arc is about your character making improvements to themselves, while an alteration arc is more about them learning how to see or interpret the world around them differently.

With an alteration character arc, your character starts and ends the story as the same person, but their views on things will have changed.

Not all characters will change for the better. In some cases, a character that starts the story as good eventually descends into evil or ill fortune over the course of the narrative.

Daenerys Targaryen from the Game of Thrones TV series underwent such a character arc. While her means may be ruthless, she had always held onto a strong moral compass with her desire to end slavery. Eventually, however, she eventually turns to using fear to assert her power and pays for it with her life in the end.

When deciding on what character arc you want for your protagonist, it's important to take your genre into consideration. There are some types of character arcs that simply do not work well with certain genres.

That said, there are no hard and fast rules when it comes to writing. It is entirely possible for you to subvert expectations by writing a character arc that wouldn't classically match with your genre. Who knows, you may come up with something brilliant!

Before you write about how your character grows or changes in their character arc, you have to be familiar with all aspects of their personality first. And the best way to do that is to fill up or create some character sheets.

Once you've got your character sheets on hand, make sure to constantly refer to them! Doing so will prevent you from writing them out of character, even as they go through their character arc. Great character arcs are able to illustrate the growth of a character, while still keeping them consistent with their core personality traits.

If you are unsure of how to start a character sheet, consider trying JotterPad's Character Profile templates to do so.

You should also consider character roles when crafting character arcs. Some characters should have deeper and more elaborate character arcs than others, and your protagonist should take first priority in that regard.

Furthermore, you may even consider drawing parallels and comparisons between different characters' character arcs! For example, your protagonist and antagonist may have opposing character arcs to highlight how they stand on opposing sides of the same coin.

4. Make sure you have a clear-cut story outline

Your characters change your narrative, and vice versa. Because of how intertwined the two are, you should first craft a strong story-outline before proceeding with planning for your character arcs.

For example, key events in your story plot may be equally important for your character arc. For example, Harry's discovery of Sirius Black's true identity as his godfather was a key event in The Prisoner of Azkaban, but it was also a key turning point in Harry's character arc. Sirius became the fatherly figure Harry never had and that gave him strength... as well as a motive for revenge.

Thus, mapping out your key events and plot points in advance will give you a clearer idea of how you want your character arcs to proceed.

We hope that this article has given you some useful insight on how you can start working on character arcs in your story! 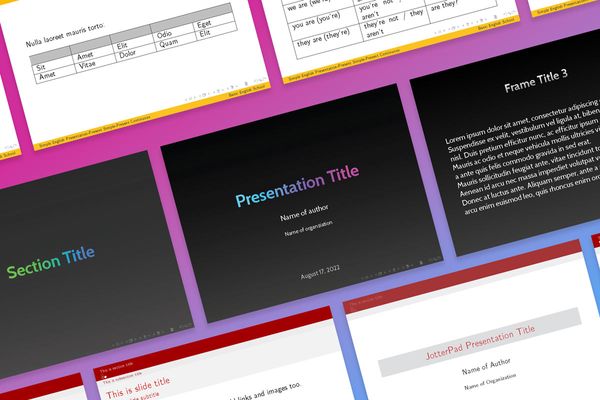 Explore making LaTex beamer presentation slides on JotterPad using Markdown without the use of Pandoc. Read on to find out more about how you can convert light-weight syntax into aesthetic slides and formatting!

This July, we are back with fresh updates for JotterPad on iOS, iPad OS, and Mac. Comprehensive templates, expanded printing options, and upgraded writing tools await you!