There's simply no understating the importance of outlining your novel and crafting a first draft. While we completely understand the urge to just throw caution to the wind and jump straight into writing your first draft, outlining your story can make writing much easier and more efficient!

Plus, the outlining process doesn't need to be as tedious as you may think. There are many different ways to plan your novel — one of which is skeleton drafting!

Coined by Steffanie Holmes from Authors A.I. and best-selling romance writer Lucy Score, the skeleton drafting method is a pretty interesting way to craft your draft zero; the draft of your first draft.

So, let's explore how you can craft your own skeleton outline!

Step 1: Psyche yourself up

"This first step is about understanding what you’re trying to achieve so you don’t get sidetracked."

It's important to note that your skeleton draft will not be perfect and polished. Be prepared to have unfinished sentences and ideas or settings and characters that are unnamed and unpolished. The main point of your skeleton draft is for you to figure out the key events in your story and how they lead into one another.

This is also where we recommend finding a way for you to stay focused on your skeleton draft. This means handling any chores or responsibilities that may distract you and cleaning up your workspace.

You should also take this time to pick a playlist that works for you! We know just how long writers take to find the perfect tune to write to, but this simply takes up precious time that you should be using to draft your story.

Step 2: Lay out the bones

It's time to build your skeleton! Steffanie and Lucy highlight the three main things you need to start writing your skeleton draft: A character, a hook, and an ending.

What it says on the tin. This is your protagonist; the character that will drive your story and stand out among your cast of characters. This, however, may change if you have multiple main characters in your story, like in Game of Thrones. For now though, let's work on the premise that your story only follows one protagonist.

In your skeleton draft, hold off on crafting a detailed character sheet about your protagonist for now. All you need is an idea of what they are like, their motivations and how they drive the story. Let's leave the physical descriptions and detailed backstories for another time.

It can be difficult to properly define what the hook of your story should be, but Steffanie and Lucy have defined it as "the spark that interested you in the story idea in the first place". It can be the main conflict of your novel, or the inciting incident of your story.

Let's use the Disney Classic, Mulan (1998), to illustrate this. The hook of Mulan would be the premise of the story and the inciting incident: Filial and brave Mulan masquerades as a male soldier to replace her ageing father in the army.

Don't be intimidated; you don't have to have a fully-fleshed out conclusion ready in your skeleton draft. All you need is a general idea of how your story will end, and not necessarily how your characters will get there.

Once again, using Mulan as an example, the ending could be succinctly summarized into: Mulan saves China. There is no need for any explanation about why, when or how she does so. If your story is a murder mystery, your story ending can be as simple as "the mystery gets solved". That's how general you can be in your skeleton draft!

On a digital writing app like JotterPad, you can draw up a table in your document to keep everything neat and organized for this step.

Photo by Greg Rosenke on Unsplash

Now that you've got an idea of your main character and your hook, you're more than prepared to craft the beginning of your story. In fact, your hook should take place within the first 30 pages or so.

In Mulan, the beginning serves to introduce Mulan as a daughter that is unable to fit into the societal expectations of a perfect wife and daughter (as well as the iconic song Reflection), and also introduces the inciting incident: Mulan's ageing father has been drafted into the army. And this is where the hook comes in, where Mulan makes the decision to cut off her hair and replace her father in the army.

"Plots come from characters. You take a person who thinks a certain way because of all the events in their life that have led up to this moment, You thrust ‘em into a situation, and what they do next is entirely hinged on who they are."

A bulk of your main conflict, you'll find, is built off of your main character's motivations, decisions and actions. While there are certainly key events caused by things outside your protagonist's control -- a villain's or side character's actions, or even a natural disaster -- you can generally get a good idea of the direction of your story just by following your protagonist!

You'll find that you'll be able to create a flow between scenes by simply asking "what will my character do next?"

In Mulan, she inadvertently causes conflict among the male soldiers by following Mushu's advice on how to interact with men. Later, she manages to regain the respect of her peers and Li Shang through her persistence and willpower. Finally, it is her intelligence that helps her trick and defeat Shan Yu, the villain, and save China.

Step 5: Build your plot with set-pieces

As you draft your story, you'll find that you'll have several key scenes already visualized in your mind. Steffanie and Lucy talk about three different types of set-pieces and how you can identify them:

1. Scenes that readers expect due to the story's tropes and genre

Going back to the example of a murder mystery, a set-piece that readers expect will, of course, be the scene where the body is first discovered. For a horror slasher film, there will most likely be a scene where the main character narrowly avoids being harmed by the killer. And of course, for a romance novel, you can easily expect there to be a "getting together" scene, where the characters confess their feelings for each other.

2. Scenes that tie up story threads

As you go through your story, you will likely have some story threads that need to be tied up, and set-pieces are the scenes that do just that.

In Mulan, the biggest story thread that has to be tied up is, of course, whether Mulan's true identity will ultimately be revealed. Throughout the story, Mulan has several close calls, but it is only after the avalanche that Li Shang and the other soldiers find out about her gender.

3. Scenes that establish or showcase a character's personality

When it comes to writing, "show, don't tell" is the golden rule, which is why you will always need scenes that can convey facets of a character's personality to the audience! As mentioned earlier, Mulan's tomboyish and adventurous personality is made clear right at the beginning of the film, where she is visibly uncomfortable during the matchmaking process and eventually causes a mess.

These are the three different ways you can identify set-pieces in your story! Think of these set-pieces as mini checkpoints in your story; all you have to do now is to find links between these scenes. This will help you eventually form your plot!

As mentioned earlier, don't be afraid to make your skeleton draft messy, unpolished and even incomplete. However, now that you've made it through all 5 steps, it's time to go through it all again and clean things up to create your first draft proper!

Steffanie and Lucy even recommend writers to open up a second, fresh file to make notes on what changes need to be made as they go through their skeleton draft. Plot points that need to be wrapped up, character names and descriptions, details about the setting, and so on.

With JotterPad, you can easily open up two different web editors side by side and work on them currently. Or, if you so wish, you can even open up both documents on two different devices!

With JotterPad's cloud sync feature, you can open up your skeleton draft on your iPad and your note-taking document on your laptop. Both documents will then be saved to a cloud sync service of your choice!

We hope that this has been able to help you plan for your first draft! 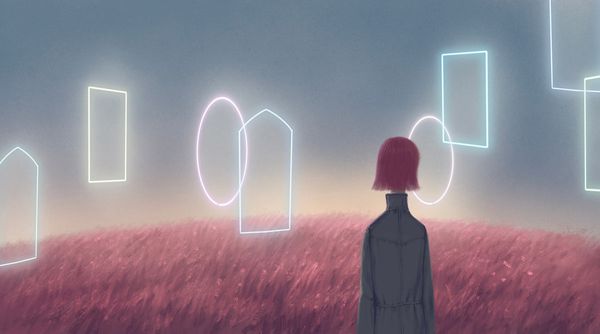 Learning about archetypes is a great way to start crafting characters in your own story. From the Anti-hero to the Outcast, here are 6 interesting main character archetypes for your reference!